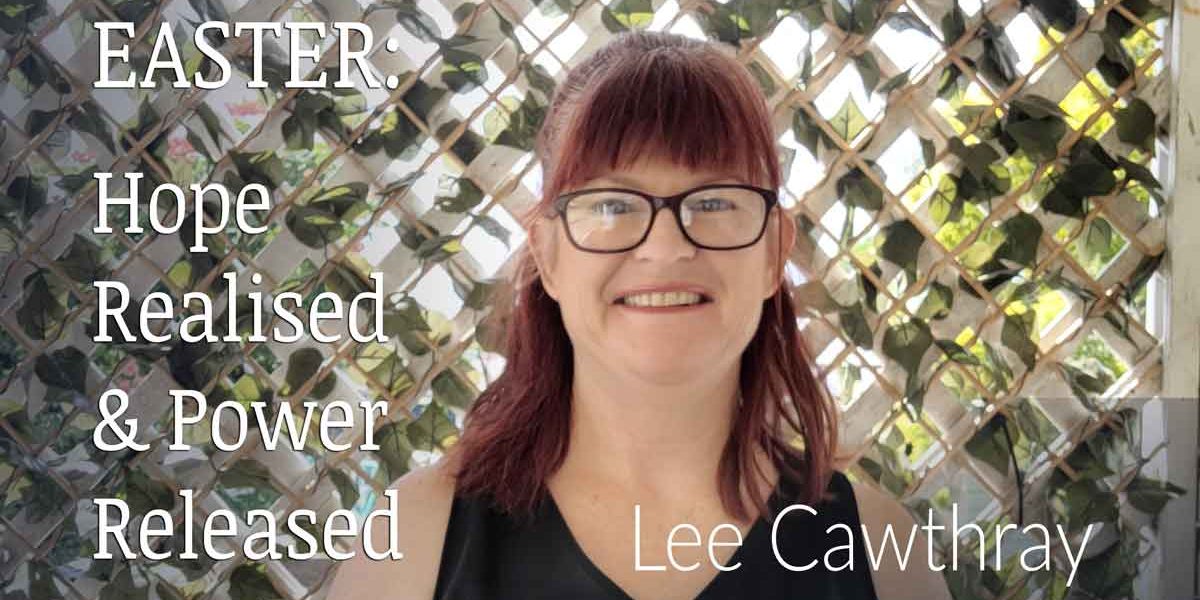 On Friday we took a quick fly-over look at Jesus’ week leading up to Good Friday. And then we parked in Mark 15:6-15 and we looked at the significance of Pilate releasing Barabbas instead of Jesus. Today, we are shifting our focus to the power of Jesus’ resurrection. If you have your Bibles with you, turn to Ephesians 1:18-21

And [I pray] that the eyes of your heart [the very centre and core of your being] may be enlightened [flooded with light by the Holy Spirit], so that you will know and cherish the hope [the divine guarantee, the confident expectation] to which He has called you, the riches of His glorious inheritance in the saints (God’s people), 19 and [so that you will begin to know] what the immeasurable and unlimited and surpassing greatness of His [active, spiritual] power is in us who believe. These are in accordance with the working of His mighty strength 20 which He produced in Christ when He raised Him from the dead and seated Him at His own right hand in the heavenly places, 21 far above all rule and authority and power and dominion [whether angelic or human], and [far above] every name that is named [above every title that can be conferred], not only in this age and world but also in the one to come.

Notice the word called in verse 18? “Calling” is a bit of pet topic for Paul, writing about himself in Galatians 1:15 we read

But then something happened! For even before I was born, God had chosen me to be his and called me—what kindness and grace

and in his letter to Timothy 2 Timothy 1:9 He wrote

He has saved us and called us to a holy life.

When you first became aware of your sin and the need for forgiveness you called out to God. At that moment, the sacrifice of Christ, the focus of our worship on Good Friday, became real in your life. The redeeming work of the cross was credited to you! In that moment, the sin stains were washed off and you took on the righteousness of Christ. And in that moment, you were called to a new of being, and new way of living. Romans 1:6-7

and you also are among those who are called of Jesus Christ to belong to Him; [I am writing] to all who are beloved of God in Rome, called to be saints (God’s people) and set apart for a sanctified life, [that is, set apart for God and His purpose]: Grace to you and peace [inner calm and spiritual well-being] from God our Father and from the Lord Jesus Christ (AMP).

We are called to live a life free from slavery to sin, why because Jesus paid the penalty on the cross Galatians 5:13

For you, my brothers, were called to freedom; only do not let your freedom become an opportunity for the sinful nature, but through love serve and seek the best for one another.

And we are called to live in peace with each other Colossians 3:15

Let the peace of Christ [the inner calm of one who walks daily with Him] be the controlling factor in your hearts [deciding and settling questions that arise]. To this peace indeed you were called as members in one body [of believers]. And be thankful [to God always].

And we were called to hope. This is a specific hope, a hope with promise. It’s not the kind of hope that we think of when we say something like, “I hope it’s a sunny day”. Or “I hope those shoes are still on sale”.

There are two schools of thought about what this hope is referring to. The first is the hope of our future life in eternity. This is hope in the inheritance that God bestows on us. Take a look at Colossians 1:12-14

and giving joyful thanks to the Father, who has qualified you to share in the inheritance of his holy people in the kingdom of light. 13 For he has rescued us from the dominion of darkness and brought us into the kingdom of the Son he loves, 14 in whom we have redemption, the forgiveness of sins.

Now if we are children, then we are heirs—heirs of God and co-heirs with Christ, if indeed we share in his sufferings in order that we may also share in his glory.

As the words of the song state, I can only imagine what it will be like when I am standing in the presence of God my Father, my Kinsman Redeemer Jesus Christ, surrounded by the glory of Holy Spirit!

Back when we were living on the farm a friend asked me what the exit strategy was for the business. I responded, “take me now Lord”. She said she was hoping for something less permanent. And yes, that was meant to be tongue in check. But I get seriously excited when I think about how amazing it is going to be when I finally go there. And according to several scholars, this is the hope Paul is writing about; living in hope, and looking forward to that day.

The other school of thought picks up on verse 6 in chapter 1 in Paul’s letter the Ephesians,

to the praise of his glorious grace, which he has freely given us in the One he loves.

We are God’s inheritance, that is we are part of God’s wealth. Warren Wiersbe writes that God views us as who we will become not who we used to be. In Judges 6:12 we read that the angel of the Lord said to Gideon, “The Lord is with you, mighty warrior“. And that is exactly what he became.

And Jesus words in Matthew 16:18: And I tell you that you are Peter, and on this rock I will build my church, and the gates of Hades will not overcome it.

We, as called children of God, live in the hope of all that we are and will become, putting aside our sinful ways, and living in the power of the Holy Spirit.

And that brings us to the next point:

[so that you will begin to know] what the immeasurable and unlimited and surpassing greatness of His [active, spiritual] power is in us who believe. These are in accordance with the working of His mighty strength 20 which He produced in Christ when He raised Him from the dead and seated Him at His own right hand in the heavenly places.

The power that raised Christ from the dead, that same power is active and working in me! I love the way Warren Wiersbe puts it, “the divine, dynamic, eternal energy is alive in me!”

Let’s break this down further, first, Jesus was raised from the dead. Each one of us will one day physically die. We will stop breathing and the flesh and blood body in which we now reside will decay. Jesus physical body died on the cross. But the power of God defeated the power of death and raised Jesus back to life. Jesus took on a risen body. And more than that, He ascended into heaven and was seated at the right hand of God. By that same power, we too will ascend into heaven and spend eternity in the presence of God.

Second, He was seated at the right hand of God. The significance of this statement is the position, the right hand of God is a position of power and authority. Not only is He our saviour, He is sovereign over all. As David writes in Psalm 110: 1 – The Lord says to my lord: “Sit at my right hand until I make your enemies a footstool for your feet.” In chapter 6 of this letter, Paul admonishes us to be strong in the Lord and in His power, why?

These are the enemies that are under His feet and in His power, they are also under ours! I don’t have live the holy life that I am called to in my own strength! How great is that? This power is how I live into Paul’s directive in Romans 12:2

Don’t copy the behaviour and customs of this world, but be a new and different person with a fresh newness in all you do and think.

I can’t do that on my own, because as Jesus Himself says,

The spirit is willing, but the flesh is weak.” But with the power of Christ at work within me, I can.

This Easter, my challenge to you is this: take some time pondering the majesty and greatness Christ. Contemplate the immensity of His power and ask God if You are truly living into that power. And truly listen for His answer. Because I suspect that, like me, you are barely tapping into that power. And oh what an amazing life we could be living if we truly tapped into the immense power that is available to us through our Lord Jesus Christ.

The Art of Balancing the Tension of Giving and Receiving
September 9, 2022
Recent Posts
Go to Top