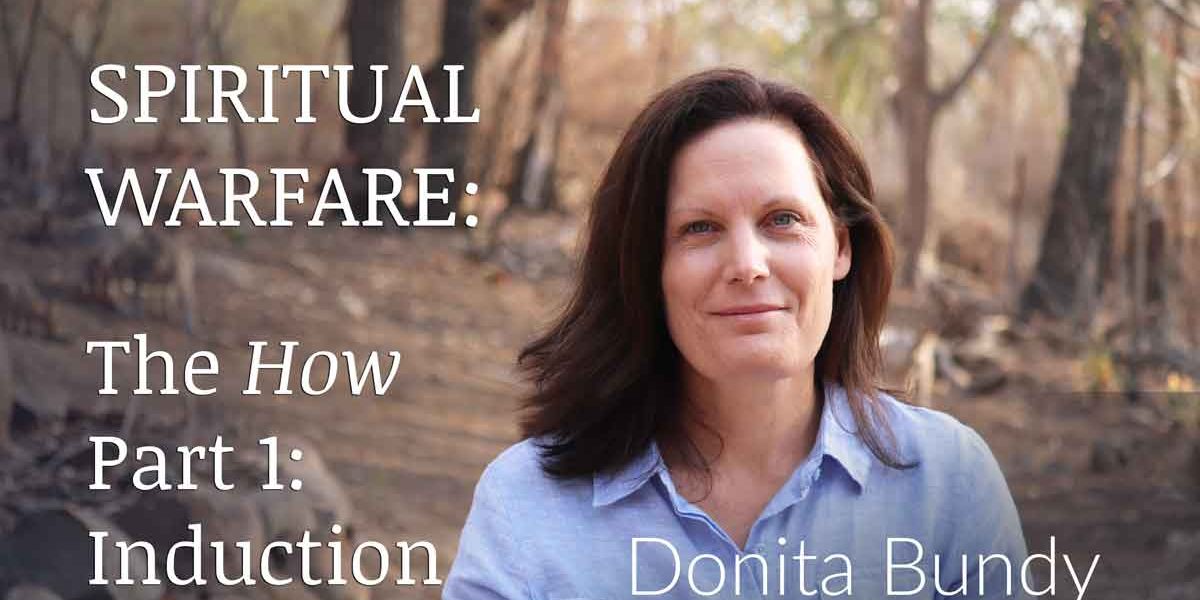 Sin is, therefore, from the moment we are born, we are at war with God. But when the Spirit stirs and our eyes are opened, the foundation of all we believe is rocked, our hearts are moved and, we see the alternative. The Answer to sin is Christ.

Last time I spoke of the Why and What of Spiritual warfare, if you want a recap, you can find the link here.

Recapping the Why and What:

As I reflected more on this topic, the more I realised identity is the key.

The world determines who we are in relation to others–mother, father, teacher etc. And who we identify as is adopted by looking into the mirror of the world’s opinion–treasured, nuisance, ugly, beautiful etc. However, as beings created by God, the truth of our identity can only be found in our creator. But …

4 The god of this age has blinded the minds of unbelievers, so that they cannot see the light of the gospel that displays the glory of Christ, who is the image of God.

What is this got to do with Spiritual Warfare?

First, it is the new identity we find in Christ which makes us aware of the war. And secondly, our ability to remain in Him is our defence in the war.

To gain some insight into what it is to be a solider, I interviewed my brother who spent 16 years in Australian defence force. 13 years enlisted, three in the Reserves. During his time, he served in Somalia as a Peace Enforcer. But I focused on asking him what he remembered of basic training – his induction into the army. And whilst we both acknowledge this was decades ago, his experience still has relevance.

Basic training was roughly 3 months full immersion where the recruit had no contact with the outside world until about ½ way through when they had a day off. The purpose of this, along with the shaving of the head, the uniform, the doing everything just like everybody else, etc. was about changing how they saw themselves.

You all look the same, dress the same, do everything the same. Even your name is taken away and you are given a number. Your space, bed, drawers, cupboards everything is identical to everybody else. The first lesson you’re learning is that you are not a civilian, you are army.

My brother said there were three main images that reflected his experience of basic training.

My brother’s first vivid memory was his groups first attempt at marching. It soon became evident to them all, they couldn’t even walk correctly. It was a humbling lesson. The bar is set high to enlist, but one of the most valuable lessons they all learned at the beginning was they weren’t as good as they thought they were.

The army aims to alter a person’s perspective, change their identity, and rattle their self-confidence for a purpose; to shift the mindset–change the worldview. This effectively removes an individual’s security and puts everyone on a level playing field.

But this is not the end goal. It would be counterproductive to have units of soldiers who felt this way. This is only the beginning. The recruits are stripped down purely so they can be built back up again.

My brother’s second most significant memory of basic training was his first attempt, in full packs and with rifles, at the obstacle course. The first element of this horror was the mud pit. The recruit in front of him jumped in and sheets of ice flew back and speared them all.

But the major difficulty wasn’t just the ugliness of the course, it was working as a team to win the race. Each team’s time wasn’t logged until their last person cross the line.

My brother’s third significant memory was completing “The Challenge”. This was the final and harshest obstacle course of Basic Training. Once a recruit crossed the finish line of “The Challenge” that was it. They were in. They’d made it. They had done everything they needed to do:

And possibly, one of the most important lessons of all …

5. They had learned they could trust their commanding officers.

I had joked, mocking my brothers experience by suggesting that Basic Training was to turn individuals into mindless clones. Willing to obey orders without thinking. But he said it was about saving lives.

“We don’t blindly obey orders. We learn we can trust our commanding officer and, when required, obey instantly. There are times when an order is given and, if you stop and think about it, want to process it, you’re dead. It’s not about blind obedience. It’s about building trust and respect and then submitting to instant obedience knowing that your commanding officer wants you to succeed and live.”

Lessons learned in our Induction

I see many similarities between physical and spiritual warfare. When we say “Yes” to Christ we receive a new identity and defect to Satan’s enemy. We are now in his cross hairs. But our new identity also ensures our victory.

When the Holy Spirit stirs in us,

1. We see ourselves as we truly are: hopeless, wretched, sinners.

The ground on which we stand is shattered. We are not as good as we thought we were and far worse than we thought we could ever be.

But when we accept the invitation of Christ to “Come”,

2. We die to self and rise in Christ so that our new identity is “in Him”.

We all wear the same uniform; the cloak of Christ’s righteousness. We are new creations.

I have been crucified with Christ and I no longer live, but Christ lives in me. The life I now live in the body, I live by faith in the Son of God, who loved me and gave himself for me.

We learn that we are no longer alone.

It is not anything we have done or achieved which as earned us this new position. It is all the work of our God. In Him we are all equal. And we all have a part to play.

9 Do not lie to each other, since you have taken off your old self with its practices10 and have put on the new self, which is being renewed in knowledge in the image of its Creator. 11 Here there is no Gentile or Jew, circumcised or uncircumcised, barbarian, Scythian, slave or free, but Christ is all, and is in all.

Part of our basic training in spiritual warfare is to identify…

4. Each of us has been given gifts and strengths to build up and encourage the body.

Because we have also been gifted with weaknesses and thorns. In this war we need to work as a team allowing others to help us, as we lend a hand to help others.

But God has put the body together, giving greater honour to the parts that lacked it, 25 so that there should be no division in the body, but that its parts should have equal concern for each other. 26 If one part suffers, every part suffers with it; if one part is honoured, every part rejoices with it.

The beauty of this is, as children of God,

5. As part of the body, we are capable of far more than what we have ever imagined.

The power of the Holy Spirit runs through us. We are surrounded by the body of Christ and led by the Word of God, our Victorious Saviour.

12 Very truly I tell you, whoever believes in me will do the works I have been doing, and they will do even greater things than these, because I am going to the Father.

A significant part of our basic training is,

6. Learning who our Father is, to trust Him and our Saviour.

And to step into His giftings and purpose, and to fight for His glory. As we do this, we will have victories. Small to start with, but with each passing trial and success, we will learn more about who He is, and who we are.

The more we battle, the more we learn, the more we grow, the more we trust and will be willing to obey. Not blindly, but instantly. When he speaks, we listen, when he sends, we go, what he says, we do, for that is the job of the soldier of Christ.

3 Join with me in suffering, like a good soldier of Christ Jesus. 4 No one serving as a soldier gets entangled in civilian affairs, but rather tries to please his commanding officer.

Straight after Jesus rose from the river at His baptism, He was led into the desert to spend “time-out” in isolation with God. After Christ called His disciples, He took them away from the crowds to allow them time to learn who He was and reveal His truth to them. When Paul joined Christ, he took time out learning the truth of his new role and to be strengthened for the task.

Throughout our induction into God’s family, our Lord leads us gently, teaching and revealing Himself and these lessons to us. We too go through “basic training”, so we are prepared for battle and better equipped for the war. He does not leave us stranded, defenceless or without hope.