Spiritual Warfare – In The End, We Stand 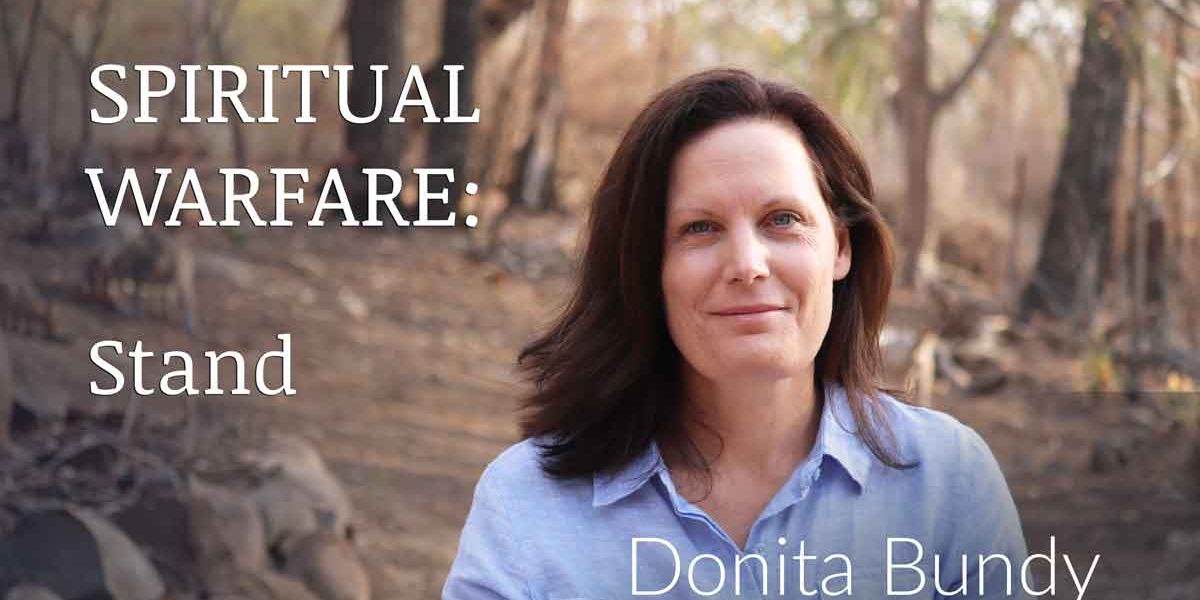 Let’s sit the word “Stand” into the image that Paul is using to teach the concept of God’s Armour: The Legionnaire whom he was prisoner to at the time.

Before we continue talking about standing, a couple of interesting notes about Legionnaire’s armour. Did you know there was no back? Why was that? Because wounds in the back and retreat were regarded as disgraceful. The soldier’s back didn’t need protection because no honourable soldier would ever expose it to the enemy.

Also, in their day, Roman soldiers, standing on open, flat ground were invincible. If they stood firm, unified in formation, they could not be beaten. The only people standing to their back and sides were their brethren.

If, on the unlikely occurrence a soldier fell, others could take up the slack. But, if someone turned and ran, they would create a breach in the line and weaken the defences.

Paul doesn’t say it in this passage, and I think that it’s because it’s a given—a cultural understanding—but not only was this illustration of armour a lesson about standing firm, it was about standing together.

Earlier in this series we learned, not only is the war we’re engaged in not our war, is it not about us. Nor is the armour we stand in ours.

Just like Christ who went before us, we draw attack from the world because we identify as Children of God. And just like Christ, we are not left defenceless and naked on the field. We are defended by the armour of God: Christ’s righteousness, salvation, peace and truth. We are equipped with the Word of God—written and living—and faith to enable us to win victories.

And we are instructed to stand. Did you note Paul uses the word 4 times in this passage. Remember space in Scripture is like prime real-estate. The more room it takes up, the more important it is.

The first 3 are the same word: to stand, stand firm, be present, to stop.

Well, it’s definitely not hip leaning against the kitchen bench sipping a cup of coffee. Nor is it butt against the wall, intently considering belly-button lint.

When I was younger, I used to compete at swimming and running.

When we stepped up onto the blocks we were told to “take our mark”—in position, very present in the moment, buzzed and waiting. Then, as the gun went off, we exploded from the blocks.

This is how I picture us as we stand. In position, present, primed, eyes looking to the goal.

But since Paul used the image of a Legionnaire, I believe a more helpful image would be a rugby scrum.

However, we’re not standing on a flat open field, a rugby pitch or a concrete block.

Last month Deb spoke to us about abiding in Christ. Living in, standing in, Christ. We read that to do this we need to obey his command to love. If we obey his command, we have removed the barriers between us, and His Spirit dwells within us. This enables us to stand in Christ. Easy right?

It would be if our Triune God was stationary, or insentient. But He is alive, highly intelligent, and always on the move. Never caught on the back foot.

OT church Perichoresis – the dance. It was first coined to help describe the Trinity. It means a fellowship of three co-equal beings perfectly embraced in love and harmony and expressing an intimacy that no one can humanly comprehend. The word is derived from the Greek “peri” meaning around, “choresis” meaning to dance.  The relationship between the Persons of the Trinity was described, by early Christians, as an eternal Holy Dance of each Person in the Trinity around and within the others.

If we want to remain in Christ, so we can stand in the battle, we need to move with Christ in the dance.

Don’t panic, we have help.

When growing up, my friend and I came up with the “standing up” game as we caught the bus home. We would stand in the space in the middle of the bus and try to stay upright as the bus navigated the inner-city streets. Thankfully as primary school children, we got out earlier that most and the busses weren’t very full.  I learned early that I had to stand with my legs shoulder width apart, knees bent, and arms spread out. When I worked on the boat, I played the same game, but for money.

Another lesson I learned from the standing up game, swimming, running, living on a boat, watching rugby and show jumping was, not only can we not afford to stand flat footed, or straight kneed, we need to look where we intend to end up. If you look at the ground, you’ll end up on the ground. This is why the Roman commanders had those brushes on their helmets. It was so their soldiers could see and identify them in the battle. So, as Christians as we “Stand” in Him—the moving ball—we keep our eyes on Him.

Luckily for us we are not called to stand alone. We stand together.

If I asked you to stand on this ball, holding onto not one, two or three others also standing on a ball, but if we all stood together, supporting each other, as we all look to Him, we are a lot more effective. And useful.

When we stand together, alert, ready, buzzing, waiting for the command, keeping our eyes on Christ, we are not only less likely to fall flat on our butts, we’re also ready to move where He leads and the Holy Spirit guides.

We are moveable. Not stuck in our ways. Feet buried in the past, or the culture of the land, or the traditions of our denominations, or our own importance. We are above that. We roll over it, together, as one, in Him.

You see, as we attempt to gain our balance standing in our ball, we cling to each other. Not just because we are told it’s a good thing to do, but because, in truth, we don’t have a hope if we don’t. And if we take our eyes of Our Lord, and start looking at the world, our feet, each other, or the ground, that’s where we’ll end up.

This is all very well and good in an ideological world of symbolism and metaphor. But how does it translate into the here and now? Here’s my view you are very welcome to accept, ponder or totally disregard.

We often give thanks that we have freedom in this time and place to come together to worship God without fear for our lives.

And so we should.

But I am not surprised there is a growing hostility toward Christians in the West, for two main reasons,

The World Hates the Disciples

18 “If the world hates you, keep in mind that it hated me first. 19 If you belonged to the world, it would love you as its own. As it is, you do not belong to the world, but I have chosen you out of the world. That is why the world hates you. 20 Remember what I told you: ‘A servant is not greater than his master.’ If they persecuted me, they will persecute you also. If they obeyed my teaching, they will obey yours also.

Before Christ came, we were enemies of God. From the time Christ was born into the world, his religious community and the world was hostile toward him. The Church was born into hostile arms and the blood of the martyrs has laid the path for the growth of our faith and the fire of the Holy Spirit. Paul called us to pray for our leaders, when at that time, the leaders were torturing and killing believers.

The Good news of Jesus Christ brings peace, renewal and salvation to the sinner. It does not bring about world peace. It never will. Jesus said:

The fourth, “to stand your ground”, means: resist, rebel, oppose, withstand— not against our family, but anything that comes between us and our God.

We have to fight to stay in Christ, in the ball—the dance—with our eyes on Christ. This is the only place we’re safe.

We stand as new creations, all standing in the rolling ball under our feet, all equally inadequate and unworthy. All in the same situation: called, forgiven, renewed, blessed and equally valued and purposed. All dependant on each other as we look to Him. Each of us has died to self and risen a new creation in Christ, filled with the spirit, surrounded by the love of the Father, all for the glory of our Triune God.

So, when the world’s hostility toward the Body of Christ escalates, don’t be surprised, be prepared. Let us be found standing together in unity of the one God, in the full armour of God, that is, Christ. Present, attentive, eyes on our Lord, full of the Spirit, and pray.

18 And pray in the Spirit on all occasions with all kinds of prayers and requests. With this in mind, be alert and always keep on praying for all the Lord’s people. 19 Pray also for me, that whenever I speak, words may be given me so that I will fearlessly make known the mystery of the gospel, 20 for which I am an ambassador in chains. Pray that I may declare it fearlessly, as I should.

Again, note the repetition of the word fearlessly. This is how we are to pray and to stand in the battle.

Finally let me encourage you with words from  the Old Testament:

You will not have to fight this battle. Take up your positions; stand firm and see the deliverance the Lord will give you, Judah and Jerusalem. Do not be afraid; do not be discouraged. Go out to face them tomorrow, and the Lord will be with you.’”